No matter how much you make (or don’t), it is essential that you have a budget. It is your roadmap for your spending.  But, sticking to the budget? That’s something entirely different.  Fortunately, I’ve figured out a simple trick that you can use to help you always stay on budget! My husband and I have a budget (just like many of you do – and if you don’t, you need to make a budget).  We also use cash for most of our spending.  Now it is down to a science and our budget always works.

However – that was not always the case.  There was a time when my cash budget didn’t work.

My husband and I had been looking back to our regular spending to determine how much to budget for our groceries.  We created our spending plan and figured out that we were spending around $550 a month.  So, for us, the logical thing was to reduce our spending, so why not lower groceries to $500 and just make it work? That should work – right?  Wrong.  At least not for us.

The problem was that while it appeared that dropping our spending by $50 to increase savings (which we wanted to get out of debt) was a smart move, it apparently wasn’t. 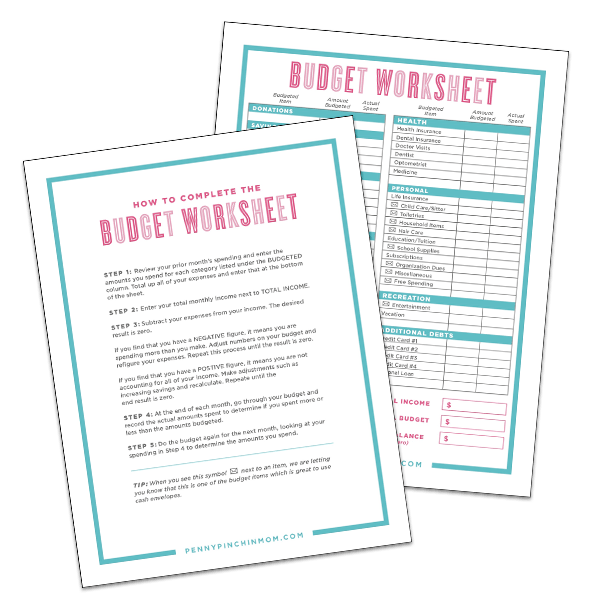 MY TRICK FOR STAYING ON BUDGET

We kept trying everything we could think of to keep us staying on budget.  I was clipping more coupons. Both of us changed our shopping habits (or so I thought).  However, it didn’t matter. I was coming up short every. Single. Month.

After some time, I decided that I had to make a change. But how?  What could we do? We had already tried to lower our spending but were spending more. Then I had an idea.

Since our we were still in debt, I was trying to build up our emergency fund.  We were getting close to our goal, but I wanted to find a way to get there more quickly. Something crazy happened that month.  I spent less.  Not just $100 less, but $150 less.

Just like that, I was spending what I had budgeted — several months earlier!!!

It was crazy, and I could not believe I had done it.  Honestly, the first time it happened, I thought it was just a fluke, so I did it again.  And it worked.  I kept repeating this same process, and suddenly, I was spending less at the store AND having more money for savings.

My simple silly trick for always staying on budget is to over budget. I know, it sounds insane, but the thing is that it works.  At least for us.

We really only do this with our groceries category, as that is the one area where we always spend money. It is a given, and it is required for us to live.  I can’t really over budget for our electric and then challenge myself to use less, as I just don’t see the results in the same way.

However, when I have my cash envelope in front of me, it does.  When I pull out the cash I did not spend at the end of our two week period and see a stack of 20 dollar bills, it is thrilling.  That is money saved. It is in my hand, and I can see it.

WHY DOES IT WORK?

Honestly, it is psychological.  When you set strict limits on yourself, it can sometimes be overwhelming.  There is the fear of messing up.  One simple mistake can lead to quickly overspending.  That makes you feel like you’ve failed.  And, when you fail at something, you just want to quit and give up.

Think about it.  If you change the way you look at your budget, it can be an instant change in your money attitude.  Don’t look at it as what you can’t spend money on  — but rather what you can.

When you allow yourself some wiggle room in the budget, you may find that you too spend less.  You are more motivated to make it work.  You see the success right there in front of you.

However, if there is a month when you do end up spending the entire amount you’ve budgeted for that line item – it is OK.  There is no stress because you’ve overspent.  Nope.  You’ve spent the amount you budgeted.  It just means no extra savings that month.